When ExtendSim launches it requires the loading of certain files and it expects that those files have been installed at specific locations. If needed files don’t have the correct permissions, or if ExtendSim can’t find the files, ExtendSim will not launch properly. 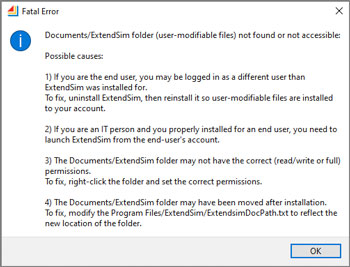 Common situations that cause problems are:

If ExtendSim issues error messages such as “Documents folder not found”, “lp_solve[0] Error…system error code:2”, or "Unable to load DLL" as it tries to launch or gives a similar error message when end users try to open model or library files: