Most simulation models represent systems or processes where the behavior of the system or process’s components are known or can be estimated in advance. Agent-based models are a special case - you usually do not know model dynamics in advance; instead, you obtain that information from the interaction of the agents in the model.

Agent-based simulation uses autonomous individual decision-making entities called agents that interact with other agents within their specified locality. Agents are whatever might be relevant to the system or process - vehicles, personnel, products, documents, etc. Based on the agent's individual behavior, the dynamics of the entire system or process emerges. Each agent has a set of rules to follow but they also have a degree of autonomy such that model dynamics cannot be predefined. This is because agents can have intelligence, memory, social interaction, contextual and spatial awareness, and the ability to learn.

The agents used in agent-based modeling are programmed as ExtendSim blocks. Blocks and their enclosed data have unique searchable identities and locations within the model. The ExtendSim database and ExtendSim functions can find and send messages to blocks that have specific characteristics, locations, and values. This makes it easy to create intelligent behavior, facilitate block-to-block interaction, and cause blocks to be moved in, added to, or removed from, a model.

For example, in constructing an agent-based model of the robotic clean up of a chemical spill, you could use the inter-block communication functions in a Controller block to locate all of the Robotic Clean Up blocks in the model. The Controller could send messages to the robots asking them to move towards a spill and clean it up. The robots could send messages back to the Controller stating whether they were available or were currently being recharged, and whether they were too far from a chemical spill or close enough to be useful. The scripting and animation functions would show the robot blocks physically moving around within the model and the spill being removed.

Let's look at a case that examines the impact of facility design on a hospital's Intensive Care Unit (ICU). Using ExtendSim, different facility designs can be compared by looking at how the ICU nurses interact with each other when requesting help to take care of patients. 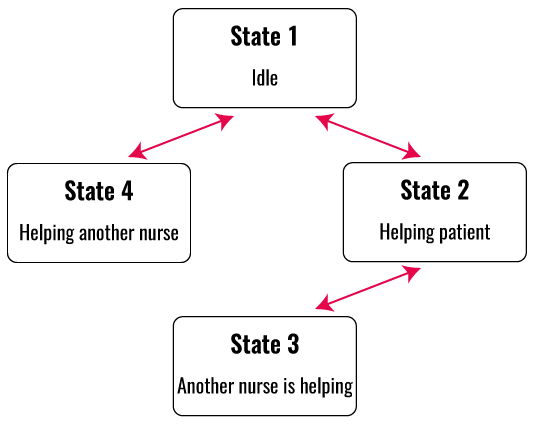 Optimum facility layout can be determined based on how the agents interact with each other in each facility design.

The ICU model is a simple, yet elegant example of how you can use ExtendSim to build an agent-based model. Breaking down the dynamic model:

Designing a commercial kitchen for a busy pizza making establishment is another great example of the need for agent-based modeling. The kitchen contains pizza ovens, storage, preparation, cutting, and staging areas. Crew members travel from one of these workstations to the next as they prepare, cook, cut, and stage the pizzas. How can you optimize the kitchen's pizza output while positioning the workstations such that crew members don't run into each other? Build it as a job shop model simulating the activities of crew members as they make and bake pizzas on-demand whilst learning where to move and when.

When a pizza is ordered, a production request is placed in a queue for the kitchen staff. Each production request consists of an ordered set of activities that are required to make each pizza. This kitchen has 4 crew members comprising its kitchen staff who are each capable of performing any of the activities required to make a pizza. Each activity is performed by the first available crew member. As more orders come in, crew members move from one activity to the next intelligently reducing the wait time between activities.

The SARS-CoV-2 pandemic has driven a need for models that can predict transmission among populations and test the effectiveness of proposed interventions to control it such as testing, quarantining, vaccinations, and nonpharmaceutical interventions. This report describes a hybrid approach that is mostly agent based, but utilizes Ro and time frames from ordinary differential equation (ODE) models to estimate infection rates and reduce data requirements. The ExtendSim model developed is intended to inform management decisions regarding testing and quarantine policies and technologies. 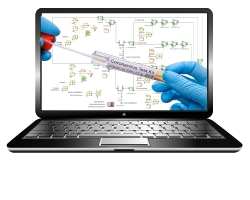 To truly estimate the life cycle of a building, it’s important to find a way to quantify the usage intensity of its individual components. Generally, many factors have an impact on the life span of the components in a building, such as product quality, maintenance, and visitor interaction with the building components, but how can you do that in a building type where user structure and interaction are too complex to analyze, such as in a shopping mall? Using ExtendSim, Shujing Deng created an agent-based model of a real shopping mall with over 100 shops on two floors. Adding the logic of a decision-making mechanism to enable the monitoring of all the interactions between customers and the main building components in the mall, the dynamics of user-space relationships within the shopping mall can be observed, exposing the usage intensity regarding building components. Running different scenarios, simulation results indicate the usage of building components mainly depends on the total number of the consumers in the mall interacting with the objects. 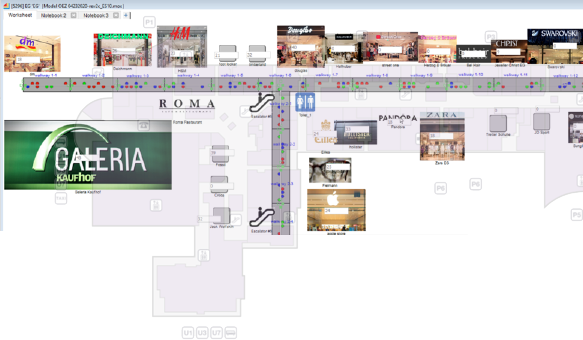