Government agencies, departments, and consultants working with the government are discovering simulation is an indispensable tool to help guide them to the best decisions. And ExtendSim has been there to help them every step of the way.

The Naval Postgraduate School uses ExtendSim to educate and train students on the value of modeling and simulation for military use. It's being used for acquisition of supplies, risk assessment, mission analysis, PTSD healthcare delivery, UAV swarm risk assessment, and more.

Battelle, in conjunction with the Center for Disease Control, developed a discrete event simulation model using ExtendSim to evaluate how retail pharmacies affect the influenza vaccine administration capacities in a pandemic.

United States Navy's logistics and sustainment operations to build a supply chain management model addressing gaps in parts support for their new modular design ships. Simulation results indicated that adapting their existing system would be less costly and have lower risk than constructing a new system.

A consultant for a branch of the US Military is using ExtendSim to build inventory and reliability models of the frequency of failure of parts on military aircraft. Once a part has failed, how does it get replaced and will the replacement part be in inventory or not? And if the aircraft is out of service, will there be another one to replace it?

Presented at the 2021 Winter Simulation Conference

This article investigates outfitting an amphibious platform with an electromagnetic railgun (EMRG), which is a high velocity weapon that can fire projectiles at ranges up to 100 nautical miles. An EMRG would provide the amphibious fleet with offensive capability, as well as defensive capability against surface threats, missiles, and airborne threats. Because the railgun remains in the early stages of development, the Navy’s railgun prototype has been modeled in ExtendSim. Detailed assessment of changes to EMRG design suggest that improvements to the probability of hit of the EMRG has a greater impact on performance than improvements to either cycle time or engagement range. This provides an opportunity for tradeoffs to be made in the design of the railgun and its projectile in which the power requirements (and size) can be scaled down without negatively impacting effectiveness, provided the probability of hit of the projectiles is not reduced.

Analytics at the Institute for Defense Analyses

IMEASURE has become an important tool in providing DoD sponsors with timely, high-quality estimates of life-cycle costs early in an aircraft’s development phase. It has been successfully applied in studies of advanced tactical aircraft, such as the Joint Strike Fighter and the F-22A, and in analyses of the upgraded UH-1 helicopter, the proposed unmanned combat air vehicle, and alternative designs for a new bomber.

This paper was published as a Roundtable Profile article in the August 2015 issue of OR/MS Today and is featured on the IDA in the Research Community .

Cost of Unsuitability: Assessment of Trade-offs Between the Cost of Operational Unsuitability and Research, Development, Test and Evaluation (RDT&E) Costs

Between 1984 and 2006, 36 out of the 136 systems that underwent operational test and evaluation (OT&E) were evaluated as unsuitable. In light of this high proportion, in October 2006 the Director, Operational Test and Evaluation, commissioned a study from the Institute for Defense Analyses (IDA) to answer the following two questions:

This paper examines the need for a UAV Swarm Risk Assessment Tool and how it can assist the Navy’s decision makers in assessing risk of UAV swarm threats in littoral environments near potentially hostile countries, based on the latest intelligence. Human-centered design principles help determine the needs of experienced battle commanders. These needs form the basis of requirements and functional analysis. The system design concept consists of several parts: discrete-event simulation of UAV swarm attacks using ExtendSim, statistical analysis of the simulation data using Minitab, and a graphical user interface (GUI) that evolved as a web-app prototype written in MATLAB. Data from the simulation is analyzed and used to generate equations that calculate the effect of critical factors: physical environment, number of UAVs, distance from land, and the ship’s defensive weapons. The GUI uses these equations to provide users with the capability to vary those critical factors and analyze different courses of action and risk. The physical GUI web-app can be used as-is, tailored or expanded. The paper concludes with an analysis of the actual GUI prototype built for UAV swarm risk assessment and how it meets user needs.

The Navy requires a capability for effective and efficient entry control for restricted areas that house critical assets. This thesis describes an Advanced Restricted Area Entry Control System (ARAECS) to meet this requirement. System requirements were obtained from existing governing documentation as well as stakeholder inputs. A functional architecture was developed and then modeled using the Imagine That Inc. ExtendSim tool. Factors affecting ARAECS operation were binned into physical, technology, Concept of Operations (CONOPS), and noise. An Overall Measure of Effectiveness was developed and a Design of Experiments (DOE) was conducted to measure the affects of these factors on ARAECS performance. The two main drivers were minimizing security violations while also maximizing personnel and vehicle throughput. Based on the modeling, an architecture was selected that best met system objectives—this architecture relied on the ability to pre-screen 40% of the workforce based on security clearance and thus subject them to reduced random screening. The architecture was documented using the Vitech CORE tool, and use cases were developed and documented. A test and evaluation plan was developed and discussed. Risk was then examined, including technical, schedule, and cost risks. 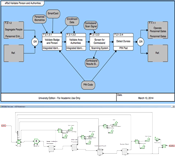 The Marine Corps must prepare itself to operate without the benefit of readily available fossil fuels and supplies shipped in by trucks or home-based supply lines. As demonstrated in the current conflicts, the threats of IEDs and the expenses of obtaining fossils fuels make it imperative that the Marine Expeditionary Brigade (MEB) of the future must be able to bring its supplies with them or have them delivered by readily available and close-by alternate means. The team chose to build a stochastic model of the notional MEB architecture framework in ExtendSim to research tradeoffs to reduce fuel consumption, while still maintaining mission effectiveness. It was documented that fuel savings are directly proportional to the Seabase distance and sea state effects during operations, which may not always be able to be influenced by the landing force. The model validates planning considerations with respect to SSD and sea state offering statistical evidence to support a recommendation that these two factors should be minimized when practical to gain best efficiencies when conducting the assault.

Visit the Calhoun site to see more research being carried out by the Naval Postgraduate School.

CTC developed the Total Life Cycle Systems Management (TLCSM) ExtendSim Logistics Analyzer (TESLA) Discrete Event Simulation tool. This tool enables rapid prototyping of life cycle sustainment models, providing both a strong foundation and the flexibility to adapt the model to many specific questions regarding reliability, availability, maintainability, and cost metrics. Originally built to analyze MRAP vehicle fleet throughout the remainder of its life cycle, the tool has been extended to additional analyses including Business Case Analyses for Program Manager, Engineer Systems and Prognostic Forecasting for the Army Material Command’s Condition Based Maintenance directorate.

Since implementation of the new tool, CTC’s analysts have maintained involvement with the Naval Postgraduate School’s Simulation Experiments and Efficient Designs (SEED) Center, enabling them to employ the state-of-the-art in experimental design and analysis of simulation output.

Modeling the proposed NHIN system design so the actual configuration will have the expected and desirable properties. This approach helps limit wasted programming or deployment resources by detecting and fixing robustness, security, flexibility, safety, or reliability faults early in the design and configuration process. Note, ironically, this model is an adaptation of a model originally configured for potential defense applications.

Booz Allen Hamilton and US Immigration and Customs Enforcement

In a strategic effort to prioritize enforcement and removal operations toward criminal aliens (those individuals illegally present in US with a criminal conviction), Booz Allen Hamilton began supporting Immigration and Customs Enforcement (ICE). Booz Allen’s implementation of analytics spanned three years and involved developing a set of models used to solve challenging problems such as forecasting the number of criminal illegal aliens, optimizing a technology deployment schedule, and minimizing the transportation costs of removal. The impact of the work resulted in a doubling of criminal alien removals, leading to greater public safety for the American people.

In addition, this Booz Allen project, “Enhancing Immigration Enforcement with Decision Analytics” won the Institute for Operations Research and the Management Sciences’ (INFORMS) inaugural Innovation in Analytics Award in 2011.

The United States Air Force, in accordance with the Department of Defense's mission to modernize its processes, systems, and information flows, began an effort to replace legacy systems with two Enterprise Resource Planning (ERP) systems. Nova Technology Solutions (NovaTech), an Information Technology (IT) and Analytics firm, recognized the Air Force's need for a repeatable, reliable, tool to aid decision making during the planning, installation, and sustainment of these ERP systems, thus proposing the use of modeling and simulation.

ExtendSim was used to create a simple simulation model to analyze the impact of ERP increased workload on network performance by simulating the flow of data packets, specifically at the Air Force Service Delivery Points (SDPs). Results showed a 15% increase in current workload (or current network traffic) will cause a 250% increase in end-user response time (Fitzgerald & Harper, 2008).

The Department of Homeland Security (DHS) commissioned the MITRE Corporation to create an agent-based DES model of airport defense and security systems. Attacker and defense behavior at the airport environment are modeled using two intelligent agents with decision making and learning capabilities. The model simulates the performance of the airport defense against threat vectors (path-weapon combinations) so security can continuously and rapidly adapt to shifting threats.

Prepared for the United States Navy in 2010

RAND Corporation uses ExtendSim to identify new equipment and maintenance strategies that have the potential to enable the Army to reduce the cost of equipment and maintain its Combat Support Hospitals at fully modernized levels, providing them with equipment that is newer and in better condition.

Modeling and Simulation Support for the Standing Joint Force Headquarters

Boeing and the Naval Postgraduate School (NPS) developed an ExtendSim model of an organizational concept called Standing Joint Forces HQ (SJFHQ) being developed at the US Joint Forces Command (JFCOM). The modeling objective was to measure personnel utilization and organizational process efficiency. Here is the abbreviated presentation NPS final report and an given at a public command and control conference. The final report contains a lot of information about the actual ExtendSim model developed.