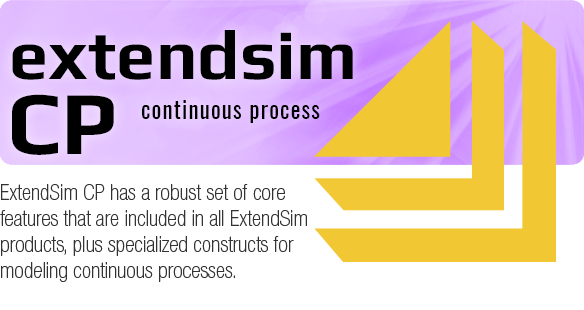 Our base product and the cornerstone of the ExtendSim family of simulation tools. Use this package to model any process where time advances in equal steps and values are recalculated at each periodic step. 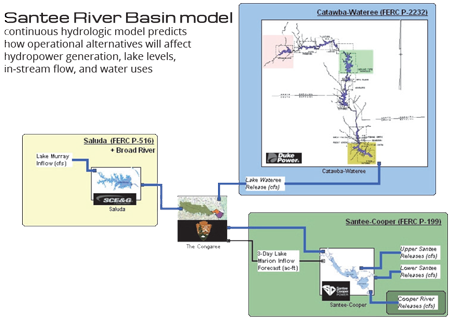 Graphically represent the dynamics of continuous processes, exchange information with other applications, manage big data using the internal relational database, perform analysis, and report results. For rapid model building, ExtendSim CP includes pre-built components that facilitate common modeling tasks as well as an equation editor to calculate values for, or perform operations in, models. It also has a full-featured IDE and sophisticated programming tools, so you can create custom components that are fully integrated, reusable, and fit any continuous process.

Note: The core features listed above are included in all ExtendSim products. 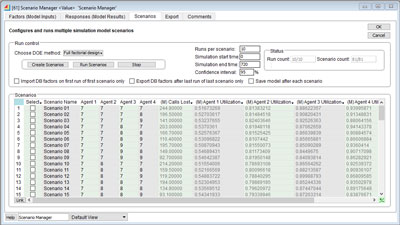 The ExtendSim Scenario Manager gives the MOST COMPLETE understanding of how a model reacts to different factors.

To facilitate analysis, all data is stored in an ExtendSim database. Data and results can then be easily exported to JMP® from SAS or Microsoft Excel® for further analysis.

Essentially, the ExtendSim Scenario Manager keeps track of multiple what-if models, all based on the same model. It does this by assigning a named scenario to each combination of variables you choose to examine. For example, create best-, worst-, and typical-case assumptions for input values. Then recall each of these scenarios to see how the model behaves under different conditions. For comparative analysis, recall scenarios in combination, such as best-case sales and worst-case costs.

The ExtendSim Scenario Manager offers a highly flexible framework for experimentation and analysis:

Searches for the best set of parameters that maximizes profit or minimizes cost, given parameter limits.

Optimization, sometimes known as goal seeking, is a powerful technique to automatically find the best answer to a problem. The "problem" is stated as an objective function or cost equation that ExtendSim tries to minimize or maximize to save you going through the tedious process of manually trying different values with each model run. It does this by running the model many times using different values for selected parameters, searching the solution space until it is satisfied that it has found an acceptable solution. It then populates the model with the optimized parameter values. 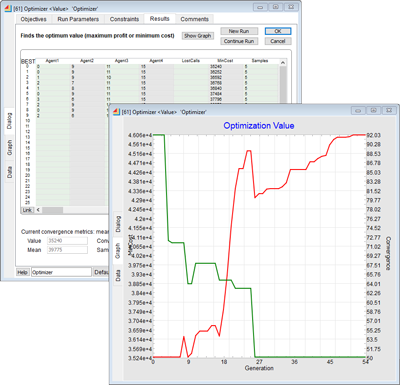 Like most optimization algorithms, the ExtendSim Optimizer solves models using an initial population of possible solutions. Each solution is explored by running the model several times using different values for some selected parameters, averaging the samples (for stochastic, random models), and sorting the solutions. The best solution sets of parameters are then used to derive slightly different but possibly better solutions.

ExtendSim goes one step further. The Optimizer block uses an evolutionary algorithm to reduce the number of times the model has to run before a solution is found. It facilitates optimization by making the optimization algorithm available within a block that can be added to any model to control all aspects of the optimization. Furthermore, having a block do the optimization increases flexibility and opens up the method and source code to users who might want to modify or create their own customized optimization blocks.

All ExtendSim products include electronic versions of the ExtendSim User Reference and Technical Reference plus Quick Start Guides for each product. All documentation is also available online for download.

Maintenance & Support Plans are required for all Model Developer Edition packages and must be renewed on an annual basis to continue receiving support, upgrades, updates, discounts, and other special offers.

Download and experiment with ExtendSim CP for 30 days for free! Join the thousands using ExtendSim to solve complex simulation problems. Explore how to create models and interfaces with a Trial version, change values and settings, run simulations and animations, perform experiments, do analysis and optimization, save and export results.

ExtendSim CP Individual and Node-Locked licenses may be purchased and downloaded through the ExtendSim Store, ordered directly through Imagine That Inc., or from your local ExtendSim reseller.

A Floating License of ExtendSim CP