The availability of critical resources to perform work is often a key factor in limiting system performance. Yet identifying which resource availabilities are most important, and to what extent the timing and duration of their unavailability impacts the system, can be a complex problem to solve. This is where the ExtendSim Reliability module included in ExtendSim Pro comes into play.

The Reliability module for ExtendSim Pro is a graphical interface for building reliability block diagrams (RBDs) and determining resource availability. It can be used as either a standalone RBD tool or in conjunction with ExtendSim simulation capabilities.

This reliability-block-diagramming (RBD) module is the first and only RBD tool to be fully integrated with a process simulation tool.

Why Choose RBD in ExtendSim over a Dedicated RBD Tool?

On the surface, a typical ExtendSim reliability model looks identical to a dedicated RBD tool's model. But the engine underneath the ExtendSim RBD is far more powerful.

Think of it this way, though they are great tools that can accomplish certain tasks, most dedicated RBD tools lack a level of accuracy. They use a black box method to calculate mean-time-to-repair (MTTR) and mean-time-between-failures (MTBF) so there’s no real knowledge of the inner workings of the process. Simulation adds transparency to the data. Some dedicated RBD tools have recognized the need to add a level of simulation to their tools, but simulation is just not their forte so is typically rudimentary at best.

What puts the ExtendSim Reliability module in a league of its own is that it is a simulation package first which has integrated standard reliability block diagramming capability. Simulation is the cornerstone of the RBD, not just an afterthought.

Even though both the Process Simulation Software (PSS) and Reliability Block Diagramming technologies employ discrete event techniques to manage the simulation clock, historically, the two technologies evolved independently of each other because they were used to solve different kinds of problems. Consequently, very little cross-pollination of ideas and capabilities has transpired between these two technologies.

As a result, PSS and RBD tools benefit from a different set of strengths and suffer from a different set of weaknesses. PSS tools are really good at capturing detailed system behavior, a weakness to dedicated RBD tools. While RBD tools can deliver the kinds of reliability policy and availability analysis that the PSS tools have never dreamed about. ExtendSim Pro bridges this gap by integrating an advanced RBD tool with ExtendSim’s PSS capabilities. 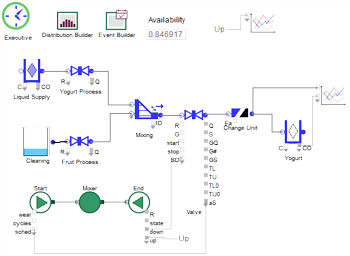 Yogurt Production:
Combining discrete rate technology with reliabilityOn their own discrete event, discrete rate, and reliability block diagramming are powerful analysis tools. Imagine the power of combining these technologies in one tool. It's like baking a cake...the cake on its own tastes amazing, but add icing and a filling and its simply spectacular! That's the synergy of combining the ExtendSim Reliability module with ExtendSim's DE and DR technologies...simply spectacular!

There are a number of compelling advantages to combining these technologies:

More accurate wearing. The process model can be used to define when certain types of machine wearing is occurring on the resources in the RBD. This can lead to a more accurate assessment of when wear-based failures occur.

Detailed repair modeling. When a resource in the RBD fails, ExtendSim modeling capabilities can be used to break out the repair process in as much detail as needed:

Are the tools needed to make the repair currently available?

What is the current level of spare parts inventory?

Are the labor resources qualified to make the repair currently available or are they performing other work?

Should we preempt key resources and redirect them to this higher priority job?

If the resources required to make this repair are currently unavailable, should we outsource the job?

The RBDs ability to model when resources and/or entire systems are down can be used to impact the movement of material through the simulated process. This allows the modeler to explore the relationship between resource availability and system performance metrics like throughput, production costs, repair costs, utilization, inventory, service levels, etc.

The ExtendSim Reliability module has many features that make it a powerful tool for analyzing the role resource availability plays in system performance and determining how to better manage the resources in terms of redundancy and maintenance scheduling. ExtendSim Pro's Reliability module includes:

Graphical diagram/database builder. The Reliability module provides a graphical interface for building RBDs. As the user builds the diagram, the databases needed to support that diagram are automatically built.

RBD/PSS interface. The Reliability module is fully integrated and supports communication between the RBD and PSS sections of the model.

Multiple event cycles per node. To accurately model resource and system availability, any number of different event cycles such as failures, repairs, shifts, and maintenance events can be associated with a particular RBD node.

Event cycle scaling. Since event cycles are stored in database tables, importing event cycles that have been defined in an external data source is supported. This makes it easy to scale up the number of Reliability Event Cycles (RECs) used to support a model.

By default ExtendSim Pro provides the ability to define up to 100 RECs per model, which is sufficient for most applications.

purchase bundles of additional RECs as your business grows and you need additional event cycles for your models.

Control logic. Optionally, the ExtendSim Integrated Development Environment (IDE) can be used to write code to control all aspects of a node’s behavior. For example, you can write code to control the speed at which a component progresses towards its next down based on any number of factors including the status of other related components, the state of the process model, seasonal policy changes, projected demand, and so forth.

RBD databases. These auto-built databases contain all the information needed to characterize the structure and current state of the RBDs in a model and document all the results from model runs. Additionally, these databases can be used to control RBD behavior during the run.

RECs are stored in an internal RBD database that uses the reliability distributions to control how components (resources) move between their up and down states over time. Since they are stored in database tables, importing event cycles that have been defined in an external data source is also supported. This makes it easy to scale up the number of event cycles used to support a model.

The first simulation tool combined with Reliability Block Diagramming components was introduced by ExtendSim in late 2018. Though the product is still in its infancy, many simulationists have found it indispensable in their projects:

Using the ExtendSim Reliability module, simplified the maintenance process of a complex system. An optimized architecture of a siphon system was modeled providing accurate results of the system's component reliability, the mean time to failure, and the operational reliability of both non-repairable and repairable systems. Plus, ExtendSim allowed over 10,000 simulation runs to be completed in a short amount of time. Read more about this research in a report by Florida International University which was supported by the National Science Foundation called Operational Reliability Assessment of a Remotely-controlled Siphon System for Draining Shallow Storage Ponds.

Reliability in rail transportation - The European Railway Traffic Management System/ European Train Control System (ERTMS/ETCS) is a relatively new system for the interoperability of railways among different European nations. Its complex infrastructure consists of various systems on trackside, lineside, and train onboard and these systems have different sub-systems comprising of software, hardware, network and signalling components. Due to its complexity, determining the failures and resolving them is challenging.

A model of the Bane NOR Østfoldbanen Østre Linje (ØØL) ERTMS pilot line was built using the ExtendSim Reliability module incorporating a combination of single station and bidirectional (BiDi) sections. 1000 simulations were conducted to assess ØØL ERTMS infrastructure. It is estimated from the simulation results that this model has the potential to determine the performance of the infrastructure, and it is deduced that predominant infrastructure failures that cause delays are due to partial interlocking fail, maintenance and track fracture, followed by failure of balise, axle counters, and points. Read more about this research in a report by the Norwegian Institute of Science & Technology in conjunction with Bane NOR called Reliability Modelling of ERTMS/ETCS.

Assembly plant - To implement and evaluate further production changes by:

Determining the optimal state of a buffer system.